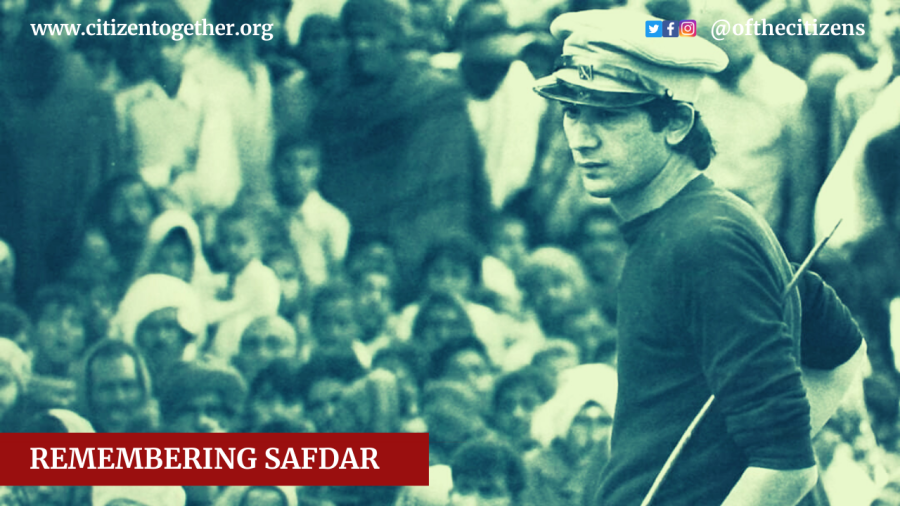 On January 2, 1989, the convenor of Jana Natya Manch (JANAM), Safdar Hashmi, died in a New Delhi hospital following a murderous attack on Janam activists the previous day by anti-social elements patronized by the ruling vested interests. Janam was performing the street play, Halla Bol, in Jhandapur, Sahibabad, in support of the workers’ demands led by the Centre of Indian Trade Unions (CITU). A worker, Ram Bahadur, a young migrant from Nepal, was also killed in this attack.  Some men believed to be associated with the Congress attacked the group during the show.

The man — theatre actor and activist Safdar Hashmi, then 34 — was also performing. He tried to reason with the men but to no avail. Hashmi died of his injuries the next day.

Two days later, led by his widow Moloyashree, JANAM went back to Jhandapur and completed the performance of the play as a defiant tribute to the man who worked tirelessly to bring theatre to the masses. Hundreds gathered in solidarity at the scene of the violence in Jhandapur, and Hashmi’s killing led to widespread protests. People from all walks of life – workers, political activists, artists and intellectuals – came together spontaneously in a massive, unprecedented protest against this brutal murder.

But what Safdar has left behind is the legacy of dissent, protests, freedom of expression and creativity in the arts. His name has become synonymous with street theatre and the progressive cultural movement in India.

Safdar Hashmi was born to Haneef Hashmi and Qamar Azad on 12 April 1954 in Delhi. He spent his childhood in Aligarh and finished his schooling in Delhi. He did his M.A. in English literature from Delhi University. After short stints of teaching in the universities of Garhwal, Kashmir and Delhi he worked in the Press Institute of India and then joined as the Press Information Officer of the Govt. of West Bengal in Delhi. In 1984 he gave up his job to work full time as a political-cultural activist.

Safdar, a founder member of Jana Natya Manch (JANAM),, was a brilliant theoretician and practitioner of political theatre, especially street theatre. A versatile personality, he was a playwright, a lyricist, a theatre director, a designer and an organizer. He also wrote for children.

His film scripts were much acclaimed. He wrote on various aspects of culture and related issues in journals and newspapers.

Safdar was a member of the C.P.I. (M). His creativity and ideology were inseparable.

In recognition of his contribution to the street theatre movement and to the growth of a democratic culture, the Calcutta University in 1989 conferred on Safdar the degree of D.Litt. posthumously.

The Safdar Hashmi Memorial Trust (SAHMAT) was set up in 1989 to promote freedom of expression and creativity in the arts. Every year on New Year’s Day, SAHMAT organises a day-long memorial, with music, dance and theatre, in Delhi, while street theatre is performed at Jhandapur.