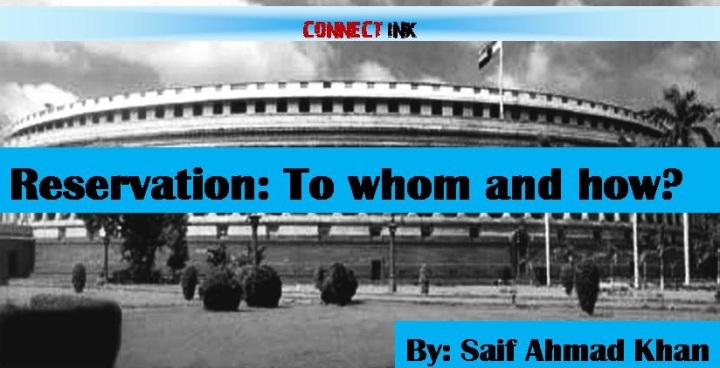 The stances for BJP in Bihar elections 2015 changed when RSS chief Mohan Bhagwat in an interview to RSS mouthpiece Panchjanya called for “a social review of reservation policy “. This experimental move by the ideological partner of BJP seems to have brought BJP on the back foot. With Mahagathbandhan leaders recalling Mohan Bhagwat’s statement and other incidences of violence on dalits, Lalu Yadav himself declared a war of castes taking a stand with dalits.

This chaos in Bihar elections over reservations makes us question its importance. In simple terms, reservation is the process of setting aside a certain percentage of seats (vacancies) in government institutions for backward and under-represented communities (defined primarily by caste and tribe).

It is not very clear when reservation actually started in India , although was introduced in princely states before independence, but the need for reservation can surely be understood by the caste system of ancient India. According to Hindu Scripture, The Rig-Veda,  Brahma(The Lord of The Universe) created different castes of people from his different body parts. He created Brahmanas(intellectuals) from His mouth, Kshatriyas(warriors and rulers) from His chest, Vaishyas(business community) from His thighs and Shudras(working class to serve other three castes) from His feet. So Shudras or dalits the unfortunates were always subject to discrimination on all grounds be it education , work or right to hold land. This caste system existed in the roots of the country but when law of equality was introduced there had to be done something to bring about this change in practical,  thus reservation served the right tool.

B.R. Ambedkar had earlier suggested that the reservations be given for a short period of time(10 years) after which if the need persists it can be extended. As reservations were not short termed and exist even after six decades of independence, a difference of opinion has developed in our society regarding reservations. On one hand Rizwan, a general category boy, states “We now feel discriminated, not me in particular, most of the students and new pass-outs , who have to face an increased competition over limited number of seats in government institutions”. He further added ,”The primary  criteria was caste based, it was acceptable then but overtime conditions of different communities enjoying reservation benefits have evolved while others have begin to suffer, so reservation should either be completely removed or criteria be changed”.

On the other hand, a  dalit  reader form The Indian Express says -” genetic suppression have occurred among dalits, tribals and other backward castes due to   thousands of years of suppression and slavery they  were subjected to by the upper caste people, so need more years of inclusive support from the government in the form of reservations, financial assistance, training etc irrespective of their present financial/social status so as to enable them to come out of the genetic suppression occurred to them due to thousands of years of holocaust”.

The public opinion has also  taken an untoward turn on reservations, now there is race among different communities to get included in OBC lists and enjoy reservation benefits whether they deserve it or not. The Supreme Court in Ram Singh and Ors against the Union of India was a welcome check on the arbitrary ways in which caste groups have been included in OBC lists. The judgement recognised that the demand for inclusion is driven in some cases by pure political powers of a group. Such inclusions make a mockery of reservations and deny other backward groups a fair opportunity.  They muddy the normative objective of reservation policy.

In yet another revelation, The Maharashtra OBC organisation had opposed reservation status to Patel community of Gujarat and Maratha community. Prof. Shravan Deore , President of Maharashtra OBC organisation said “these communities are upper class landlords and rulers as they have been in power since last several years, hence  almost all commissions including Mandal Commission had suggested that these communities should not be given reservation”. The list of illegal reservation demands is very long.

Bihar election is a mirror to the level and type of caste reservation politics played at times in India. If such practices go on like this then surely no good is to be done to our country. Now the time has come to reform reservation policies. To make the reservation criteria from caste based to BPL(redefining BPL standards) based and that too for a certain period of time after which the BPL list can be refreshed to make room for others. This will ensure that only under-represented people belonging to any caste or community get reserved.

“The writer ((Saif Ahmad Khan) is student of Geology at Aligarh Muslim University. He can be reached at sak.saifkhan@gmail.com”